ONE Thomasian MD is a collaborative effort of the UST Hospital Department of Medical Education and Research (USTH DMER), the Faculty of Medicine and Surgery and UST Medical Alumni Association with a common goal of building a “one thomasian medical community.”

It became a venue where young leaders uphold their ideals and aspirations of building one thomasian community that carries within him the pride of being a thomasian physician.

Where are we going Thomasian MDs?
Dr. Sandra Navarra, opened the event with a question, Quo Vadis?… Where are we going thomasian doctors? For almost 144 years we have managed to stand the test of time, but along the way as we roll with the wind, we became divided in spirit that for so many years we failed to look at that division as hindrance to improvement. But do we really look at our future? How do we see ourselves for the next several years? And that question left us hanging.

The attendees were invited from different levels composed of medical students, junior interns (JI), post-graduate interns (PGI), residents, fellows and consultants – representing the different stages in a doctors’ path to becoming a holistic physician. They were intermixed into 15 groups. The consultants served as facilitators of the conversation and within the circle table they conversed with liberty to speak their mind and express their ideas, filling the room with diversely beautiful perspectives. At the end of the conversation they became one in mind and were able to come up with the characteristics/principles of being a doctor, defining a thomasian physician.

The session requires group sharing and brainstorming where Dr. Maria Lourdes Bolong gave a concise orientation on the conduct of the conversation. In every circle, everyone becomes a leader, everyone has an opportunity to speak and be heard.

“What transforms a meeting into a circle is the willingness of people to shift from informal socializing or opinionated discussion into a receptive attitude of thoughtful speaking and deep listening and to embody and practice its structures.”

This was the message instilled in each participant before they engaged in the conversations.

5 Star Physician
Following the conversations, each group shared their harvests, elucidating their work to everyone. Most groups described a thomasian MD based on the characteristics of being a “5 star physician” — healer, teacher, manager, researcher, and social mobilizer.

Thomasian MD is a compassionate HEALER recognized by patients through our bedside manners and approach. We give due respect and honor to all patients regardless of their status in the society.

An EDUCATOR (teacher) is another role of a physician, creating great minds and building knowledge. It is forming and molding aspiring students to become one of the best in the field of medicine.

Research had opened several doors to discovery of new knowledge. Being a RESEARCHER is one role that specializes in systematic investigation in search for innovation. In the field of science, it
is an exclusive

Dr. Anthony Leachon talked about building a culture of change. Introducing the UST advocacies of engaging and enabling competent doctors. Strengthening and providing seamless connectivity online and offline, utilizing the social media to our advantage, creating USTMAA mobile app that can go with us anywhere and everywhere.

The core principle of the talk is to show the power of unity, that by uniting the different sectors of the thomasian community we generate an organized environment and create a place like home.

We believe that the strong foundation for success is when every member of the community is in unison in principles and action.

The Get Together Dinner was served while all participants and special guests like Rector Magnificus of UST Rev. Father Herminio V. Dagohoy, OP, the UST FMS Regent Rev. Father Angel A. Aparicio, OP and Dr. Jesus Valencia were entertained by the performances of Marjorie Inumerable, a SLE-scleroderma overlap patient, who rendered songs namely “On My Own (Les Miserables)” and “Ikaw Lang Ang Mamahalin (Joey Albert)” accompanied by Catherine Zulueta, a SLE patient, on the keyboards.

Dr. Jade Rozelle Javier, a fellow of Infectious disease, serenaded the participants with her rendition of “Lay Me Down (Sam Smith)” and “Kahit Maputi Na Ang Buhok Ko.” Dr. Michael Tan, urology resident, entertained the crowd with his alternative rock songs. Kim Villaflores, another SLE patient and a conservatory of music student, sounded beautifully as she played the strings of the violin. Dr. Patrick Moral and Dr. Maria Piedad Natividad summarized the harvests of the ICON conversation and stressed on important matters discussed by the groups.

Rev. Fathers Herminio V. Dagohoy, OP and Angel A. Aparicio, OP gave short messages of support for the success of the event and to continue in doing initiatives like this to instill pride, loyalty and unity among all Thomasians.

We may not have all of the traits of a 5 star physician but we are in the process of improving ourselves to becoming one. All we need is the opportunity to change, and change starts from the young.
Remember, the youth are the future of this nation and we should start them young. Let us lay the grounds to make them the bearers of truth and charity, to be the catalysts of change, to nurture people and nature and to build a unified community. 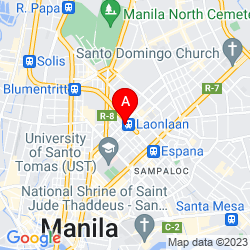